I have made a new version of ExTiX – The Ultimate Linux System. I call it ExTiX 16.4 KDE Live DVD. (The previous version was 16.2).

ABOUT
ExTiX 16.4 KDE DVD 64 bit is based on Debian 8.5 Jessie/Debian 9 Stretch and Ubuntu 16.04.1. The original system includes the Desktop Environment Unity (Ubuntu). After removing Unity I have installed KDE Frameworks 5.18.0 with KDE 4.15. KDE Frameworks are 60 addon libraries to Qt which provide a wide variety of commonly needed functionality in mature, peer reviewed and well tested libraries with friendly licensing terms.

The system language is ENGLISH.

Compatibility
A general truth: If an original system can run on a particular computer an Exton “remaster” of the same original system can run on the same computer. I never change a Linux system for the worse in terms of auto configuration and hardware detection, etc. It happens that I replace the original kernel, but always to a “better” one with even more native support for various hardware etc. (Which I have done in this case).

NEWS 160728 about Exton|OS Light Live DVD – ISO file of 885 MB
I’ve made a new extra version of Exton|OS based on Ubuntu 16.04.1 (alias Xenial Xerus) 64 bit with only a minimum of packages pre-installed. Among them a terminal emulator (LXTerminal), a Web Browser (Google Chrome – so you can run Netflix), PCManFM (file manager), NetworkManager, GParted (Partition Editor), Samba (so you can reach your Windows computers) and Synaptic (Package Manager). I give you the pleasure of installing all extra packages you need after a hard disk installation of Exton|OS Light. Use Synaptic for that. You can of course also install new packages while running the system live (from DVD/USB stick), but nothing will be saved after a reboot. Unless you have followed my USB Install Instruction (under B) or used UNetbootin) and used Boot alternative 2 – Persistent when you have used UNetbootin. If you have plenty of RAM you can even install big programs (such as LibreOffice) while running the system live even from DVD. Exton|OS Light’s Window manager Openbox guarantees lightness and elegance.

About
Exton|OS Light Live CD is based on Ubuntu 16.04.1 Xenial Xerus 64 bit and Debian Stretch/Sid. Exton|OS Light’s ISO file (of 885 MB!) is a ISO-hybrid, which means that it can very easily be transferred (copied) to an USB pen drive. You can then even run Exton|OS from the USB stick and save all your system changes on the stick. I.e. you will enjoy persistence! Read my USB INSTRUCTION under B).

Packages
All installed packages in Exton|OS Light have been updated to the latest available version as at July 28, 2016. Study the full package list.

Used KERNEL
My special kernel 4.6.0-9-exton, equivalent to Kernel.org’s kernel 4.6.4. You can download “my” kernel if you want to use it in another Ubuntu/Debian system.

Log in to Openbox
When the system has booted up you will end up in X (Openbox) as the ordinary user live. You can log out from Openbox and back again as root (“Other”) if you want. The password for root is root. When logged in as live you can become root with sudo su. There is no password for live when running the system live. (I.e. from CD or USB).

How to change wallpaper
Exton|OS Light and Openbox uses Nitrogen Wallpaper Manager to change desktop background. Open Nitrogen and you will see all wallpapers in /usr/share/backgrounds. Choose the one you want.

Repositories and software management
Exton|OS Light is totally compatible with Ubuntu 16.04.1 Xenial Xerus and therefore uses Ubuntu’s repositories. After a hard drive install of Exton|OS you can go ahead an install any extra software you like and also upgrade the whole system. After running the command apt-get update you should use Synaptic Package Manager.

USB installation
Read my INSTRUCTION. For persistence please read under B) or use UNetbootin.

Runs from RAM
Another great thing is that Exton|OS Light can run from RAM. Use Boot alternative 3 (Copy to RAM). When the system has booted up you can remove the disc (DVD) or USB stick. You’ll need at least 2 GB RAM to run Exton|OS Light that way. Since the system is relatively small (ISO file of 885 MB) Exton|OS Light will run really fast from RAM. Super fast I would say!

The ISO file (exton-os-light-64bit-isohybrid-885mb-160728.iso) can also be downloaded from the Swedish Linux Society server. 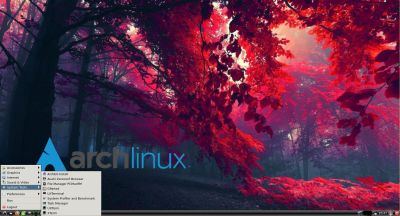 INSTALLED SOFTWARE
Among many other programs, Firefox, Gimp, GCC, Wicd and GParted – study this package LIST.

INSTALLATION to hard drive
ArchEX can easily be installed to hard drive of those who so desire. Use ArchEX Installer. I.e. while running ArchEX live from the DVD. Read this INSTRUCTION.

Install ArchEX to a USB Pen Drive with persistence
Please read my INSTRUCTION. All your system changes will be saved directly on the stick.

Rolling distribution
Arch Linux/ArchEX are rolling distributions, which implies that once you have installed the system on the hard drive there is no need for re-installations (which otherwise is common in the Linux world).

WHO should run Arch Linux?
My answer: The system fits the “advanced” Linux user/enthusiast, who would be willing to run an occasional command from time to time.

BENEFITS of ArchEX/Arch Linux
“Cutting Edge”-software and speed. You will for example always run the latest kernel if you upgrade ArchEX/Arch (for example) every month.

Read also about RaspArch for Raspberry Pi 3 and Pi 2

RaspAnd Marshmallow Build 160717 is an Android 6.0.1 Marshmallow system which can run on Raspberry Pi 3 and Pi 2. I have finally managed to include Google Play Store and other GAPPS. This version of RaspAnd is faster and more responsive than RaspAnd Lollipop Build 150924/160315.

More about the news in Build 160717
1. Build 160717 uses a new kernel – 4.4.15-exton.
2. Google Play Services has been upgraded from version 8.4.87 to 9.2.56. The latest version by 160717.
3. YouTube has been upgraded to version 1.3.11. The latest version by 160717. The video performance is far better in RaspAnd Marshmallow Build 3 than in previous versions. You can watch almost all movies in YouTube with acceptable quality.
4. Clash of Clans works even better in Build 3.
5. The sound quality is excellent in Build 3. Especially is you connect loudspeakers to your Rpi. Maybe because of the new kernel…
6. Bluetooth works as expected.
7. Most important: With Google Play Services in latest version (9.2.56) you are not dependent on Google Play Store. You can install almost all GAPPS and other apps via Aptoide App Manager.

YouTube performance
YouTube works alright in RaspAnd Marshmallow Build 3. You can watch almost all videos. I.e. normally you will hear the sound very well, but some the movies won’t play or play very slow with strange colors.

New features in version 160714 of SlackEX
I have replaced kernel 4.5.1-x86_64-exton with kernel 4.6.4-x86_64-exton with support for “everything”. Most important is that I have changed repositories from Slackware 14.1 to Current. I.e. Slackware 14.2 (released 160701). KDE is upgraded to version 4.14.21 (latest KDE version). All other component software is also upgraded to the latest Slackware Current version by now. I may also mention in particular GParted 0.24.0 (latest, not in Slackware’s repositories), VirtualBox 5.1.0 (latest, not in Slackware’s repositories), Google Chrome 46.0.2490.86 (not in Slackware’s repositories), Gimp 2.8.10 (installed from source), GSlapt 0.5.3h, Firefox 47.0.1, Thunderbird 45.2.0, Samba 4.4.5 and GCC 5.3.0. Furthermore I have installed Grub2, which can be used as boot loader (if you want) after a hard drive install. Study the full package LIST. Note: I have replaced Wicd with NetworkManager. It works better. Most important: This version of SlackEX has to be installed to a USB Pen Drive!

Install SlackEX to hard drive
Use this INSTRUCTION. You can (if you want) use Grub2 (new GRUB) as boot loader.

I have compiled a very useful (as I think) 64 bit kernel for Slackware Current (14.2) and/or all Slackware derivatives. For example Slax, Zenwalk and SlackEX. The kernel is compiled exactly the same way as Slackware’s latest kernel huge. “My” kernel 4.6.4-x86_64-exton has even more support for new hardware, etc. Kernel 4.6.4 is the latest stable kernel available from Kernel.org. Released yesterday (20160711).

About Exton|Defender SRS (in two versions)

Exton|Defender SRS is a Linux system available as a Live DVD (based on Fedora 24, 64bit – version 160705 and on Mageia 5, 32bit – version 150701) for administrating or repairing your system and data after a crash. Exton|Defender aims to provide an easy way to carry out admin tasks on your computer, such as creating and editing the hard disk partitions. It comes with a lot of Linux software such as system tools and basic tools (editors, Midnight Commander, network tools). Exton|Defender can, however, also be used as a normal Linux Desktop System. It requires no hard drive installation, but can easily be installed to hard drive if you want. Desktop environments: Cinnamon 3.0.6 in version 160705 (Fedora 24) and Cinnamon 2.4.5 in version 150701 (Mageia 5).

OpenCPN is a free software (GPLv2) project to create a concise chart plotter and navigation software, for use underway or as a planning tool. OpenCPN is developed by a team of active sailors using real world conditions for program testing and refinement. Read about the new features in OpenCPN 4.4.0 (released 160613)…

Replacement
This build (160703) replaces build 160308. Ubuntu has been upgraded to version 16.04 and OpenCPN to version 4.4.0 – latest. Build 160703 is made especially for Raspberry Pi 3, but can also be used on Raspberry Pi 2. The Desktop environment LXDE is used. The “Lightweight X11 Desktop Environment” is an extremely fast-performing and energy-saving desktop environment. LXDE uses less CPU and less RAM than other environments. It is especially designed for cloud computers with low hardware specifications, such as netbooks, mobile devices (e.g. MIDs) or older computers.

Watch a YouTube video that shows the performance of OpenCPN on a Raspberry Pi…
NOTE: Please don’t ask me technical questions about how to use OpenCPN. I’m no expert on OpenCPN. You can search the Internet for answers. There is a lot written about OpenCPN and Raspberry Pi. The Cruisers Forum (World Cruising and Sailing Wiki) is a good starting point.

Installed packages
Besides from LXDE and OpenCPN a lot of ordinary Debian/Ubuntu packages are pre-installed. I can mention Firefox, Chromium Web Browser, Synaptic Package Manager and Gimp. Study the full package list of 160703…

Compatibility :: July 2016
Unfortunately not all systems made for Raspberry Pi 2 will run on the new Pi 3. They need to be upgraded with a new kernel. I therefore have to upgrade the systems I distribute. I.e. RaspEX, RaspEX with OpenCPN, RaspAnd Lollipop, RaspAnd Marshmallow and RaspArch. I have now (160703) upgraded all systems. Read about the new Raspberry Pi 3…